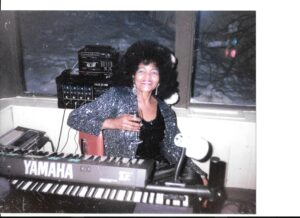 Juanita Martin (In her own words)

I am Juanita Martin. As a native of Colorado Springs, I attended Bristol and Steele Elementary Schools, where a music education was stressed – from the basics in classical music to learning to square dance with the accompanying appropriate music. In my family home at 810 North Walnut Street, Colorado Springs, music was stressed, as well, in that my Aunt Bobby Stroud was an apt pianist and an aspiring piano teacher.

Because I had no compunctions about entertaining and could carry a tune, I was “drafted” as the lead singer of “The Stroud Four,” a group comprised of my two older sisters, my older brother, and me. Aunt Bobby arranged for performances in local churches and at Camp Carson (now Fort Carson) in our crowning achievement of singing to soldiers, among whom was the famous boxer, Joe Louis. I had no idea what I was doing but simply followed Bobby’s oft-rehearsed instructions to give it my all into a microphone that was taller than I and gave frequent feedback for other performers. With Bobby’s direction, there was no feedback when I performed, as my sisters danced behind me and my brother cried offstage—refusing to join us.

Singing in churches and in school choirs and glee clubs continued in Detroit, Michigan, where we were sent to join my mother and step-father. After high school graduation, I enlisted in the U.S. Navy — often entering talent contests –and was honorably discharged as a Yeoman 2nd Class (E-5) after serving four years. I am married and the mother of seven children.

Juanita Martin was born in Colorado Springs, Colorado and grew up in Detroit, Michigan. She performed as a lead singer with The Stroud Four and later served in the U.S Navy. After earning a BA and MS in Elementary Education, she went on to teach K-12 students before becoming and executive producer and founder of Black Beat Productions (BBP) with her husband, Greg Johnson. The couple now reside in Colorado Springs and continue to manage BBP/

Juanita is the daughter of the legendary Kelly Dolphus Stroud (1928 Olympic contender, Sachs Scholarship recipient and inspiration for the Colorado College Stroud Scholars). Dolphus, as he was known, was one of the 11 remarkable children born to Rev. K.D. and Lulu Magee Stroud. Juanita is the proud mother of seven children and a loving husband.