We Help People Help Themselves.
Your Donation Lets Us Help More. 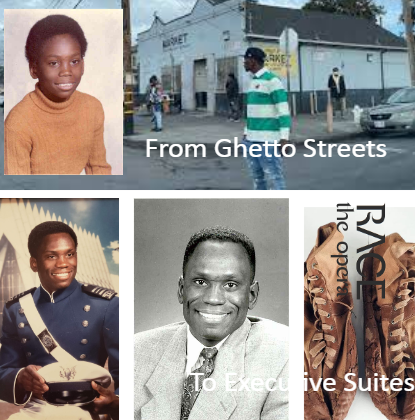 Your gift helps us inspire, educate and mentor thousands of underserved who are in need each year. MAKE A DIFFERENCE.

Meet Frank from the Ghetto Streets

Frank was raised in the ghetto streets of Oakland, California with a single mom and three sisters on welfare. His two younger sisters died early, victims of the drugs, crime, poverty and racism surrounding them.

Frank was recruited by the local gangs, but through education, art, music and sports he avoided the risks of street life. He went on to earn a Presidential Appointment to the US Air Force Academy and earn BS and Masters degrees. Frank has trained and competed with Olympic athletes, flown military jets, and traveled the world as an award-winning business and technology consultant with IBM and Ernst  Young.

He is the family ambassador for the Stroud Scholars and The Stroud Academy which reaches out to at-risk youth and adults in under-served communities to help them help themselves.  The Stroud Academy honors the legacy of his mother, Vanessa Stroud and his uncle Joe Stroud, as well as the heritage of his great grandfather Rev. K.D. Stroud who was born and raised on a Texas slave plantation.